the regular homepage will be back in a day or two!
substitute index

This photo was taken in Batavia NY in 2006, where I lived back in the mid 60's,
It is adjacent to one of the fire stations and the HQ for the DL&W Railroad,
Few, but important words.

(If you dislike or are otherwise offended by this page, please see my disclaimer at the bottom-don't complain-just hit the back button, or otherwise just go away) 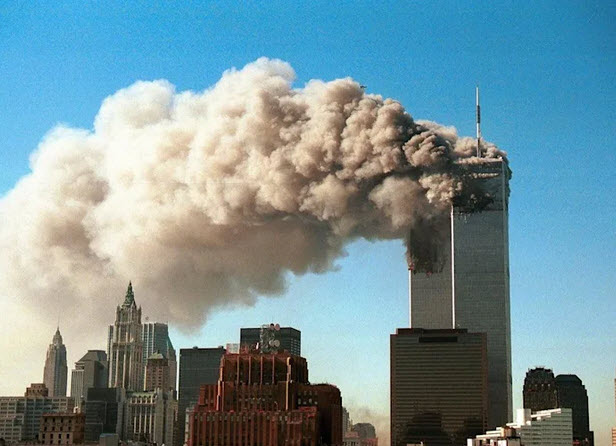 My 9/11 20th Anniversary Memorial in the front yard

Let us not forget the event that changed the world 19 years ago today,

Let us not forget the men and women who lost their lives in that event,

Let us not forget the brave men and women of the New York Police
and Fire Departments who died trying to save those in peril
because of people that do not share our way of life and/or our values.

I believe West Virginia has done one of the best jobs with a commemorative license plate, caught this one on (of all days!) 9/11/10.

Virginia comes in with a close second place with this special plate....

(From the Empire State Building, summer 2000)

And let us not forget the magot sucking dorkweed scumbag that was behind it all,

And his replacements..... STILL plotting their next move,

Let us not forget that "they" will not rest till we are gone or they are gone,

And that his/their kind need to be exterminated from the face of the earth....

Let us not forget that these people continue to come into our country as welcomed guests,

And come over here to plot against us while taking advantage of....

our hospitality, our freedom, and everything else this country has to offer, 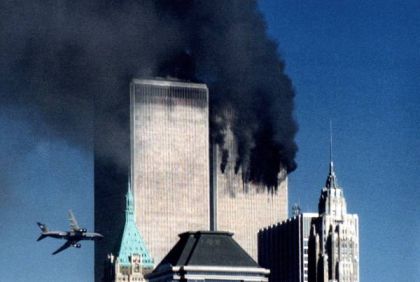 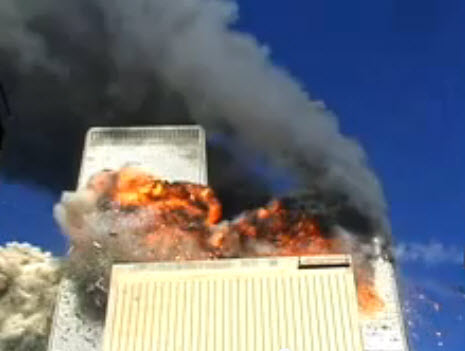 And let us not forget that they snub their nose at our way of life and want to take it away from us,
If they don't want to abide by our way of life,
and instead want to impose their ways on us and bring their own shitty ways of life here,
Why don't they just go back home where they don't have to change anything?
And exist in their shitty little meaningless lives in their shithole of a country....

Let us not forget that the event of 2001 has changed America and the world forever, and for the worse,

Let us not forget that the terrorists have already succeeded in many ways to making our every day life worse,

Let us not forget that we are less free because of 9/11,

Please take a minute to pray for and thank our men and women in the armed forces who have taken the time to defend this country and may have given their lives so that we may be the free country we are, and are trying to protect us from anyone that wants to take that away from us.

Some stuff to make us feel better: 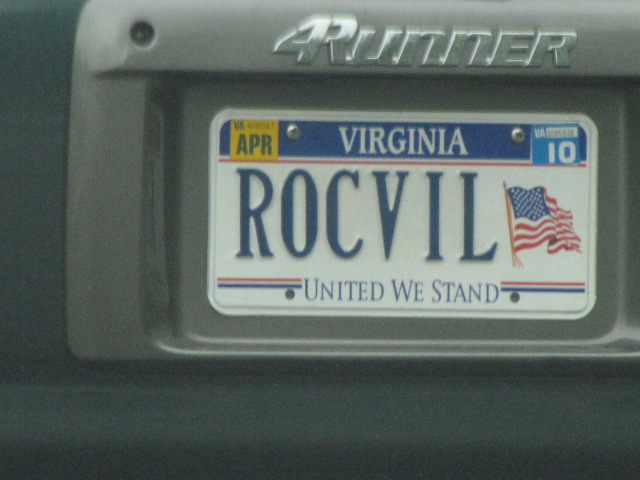 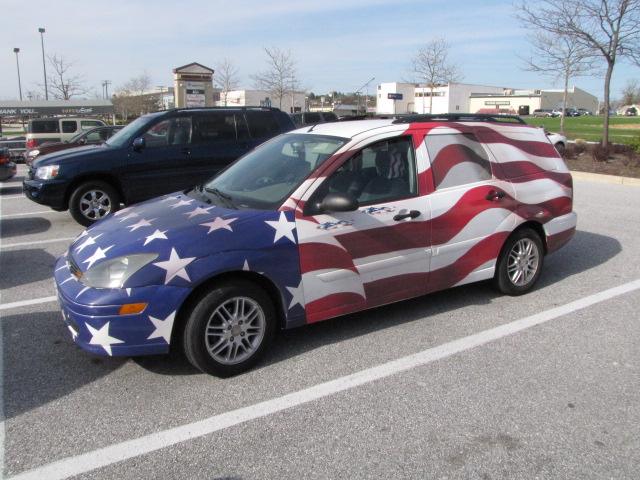 I know it's a train picture, but the engine number is great!... It was taken in Perryville MD

Let us not forget:

The people that did this 20 years ago, STILL pose a threat not only to the United States,
but the whole free world!,
The rest of the FREE world is finding this out,
Paris in November 2015 is one good example....
Nothing personal, but let the Arab countries take in the refugees from Syria, why does it have to be US in the U.S.?

All we have to do to see they don't want to be part of a modern and progressive society is look
at how they reacted to a cartoon that did not put their faith in a favorable light,

All we have to do to see they don't want to be part of a modern and progressive society is look
at the way they complain about the way they were treated in Cuba,
But don't care how their captives are treated.....

All we have to do to see they don't want to be part of a modern and progressive society is look
at the trouble their neighborhoods have been creating in places
like France, Spain, England, Dearborn MI and Miami FL
And it's getting worse and worse year after year!!!
Please, Go The F**K Home if you don't like it here!

All we have to do to see they don't want to be part of a modern and progressive society is look
at the way they treat their women like second class citizens,

All we have to do to see they don't want to be part of a modern and progressive society is look
at the way they wanted a pig farmer to close his doors so they can build a church next to the property,
(You gotta love the farmer's sense of humor for having Pig Races on Saturday!!! :-)
Again, Go Home if you don't like it here!

All we have to do to see they don't want to be part of a modern and progressive society is look
at the way they want you to convert to Islam,
But will kill you if you leave Islam,

And if you're not Muslim, they don't want you reading the Koran,

They don't seem to me to be a very reasonable or a really nice bunch of people overall, wouldn't you say?

Continuing evidence that these people don't want what America has to offer
and will go to any length to prove their point and be a pain in the ass.
Why do we have to give up our American values to accommodate these heathens?:

Disclaimer:
I am a reasonable and pretty fair person, most of the time,
I try to do the right thing, most of the time,
I do not dislike people for their religious views, most of the time,
I am, 100% American, ALL of the time,
If you do not see something wrong with the Muslims wanting to build a temple next to the 911 site in NYC,
or something wrong with the Muslims wanting to build one next to a pig farm and demanding the pig farmer move or stop,
well, just maybe, you really aren't American as you think,
This country was founded and built on Christian values,
Christianity came from Judaism,
If you don't like Judeo-Christian values and can't live peacefully next to "us", PGTF home,
Islam also came from Judaism,
So why do they want to exterminate the people they owe their existence too?
Why do they hate non-Muslims so badly?
Mind you, not all Muslims want to kill non-Muslims,
But most are silent about the atrocities the radical Muslims do to other people,
The United States used to be a country where the majority ruled,
But we are catering more and more to the minorities who do nothing but complain and do nothing or produce nothing
to make the United States a BETTER place for all,
I DO have a problem with people that come to our country and then want US to change to accommodate THEM,
As I said earlier, if they (or YOU for that matter) don't like it here,
If they don't want to integrate into OUR society,
If they don't want to learn to speak English,
If they don't enjoy the benefits they get living here, FREEDOM,
Then let them (or anyone (and I mean ANYONE) else who is not happy here),
Go back to the little shithole of a country they came from and stop asking US to change!!!
This goes for ANYONE that is not happy here and does not want to be a real U.S.A. American.....

I might add that in recent years, it seems like the Liberals are starting to rant like nobody's business,
like there is something wrong with being an AMERICAN and having strong American values,
It's like we have forgotten the lesson of 9-11,
to all ya'll, you can leave with the rest of them that don't like it here,
STOP RUINING OUR COUNTRY, ALL OF YOU!!!
I might add that even the picture at the top of the page is now gone, probably because some liberal complained.....
(ps, I don't know that for a fact, I'm just guessing, shit, maybe the building was bought by a bunch of liberals :-)

Sorry if this offends anyone, I did this page for me, not you,
I had a friend at work who asked me to remove this page, I told him I wouldn't, he didn't talk to me for 6 months! :-)
YOU can hit the go away button after you kiss my grits, just leave instead of getting pissed off if you don't like it.....

This year really sucks in more ways than I can count, but,
given the current social attitudes prevailing, I still stand by what I say above,
both in the content of the page, and the normal disclaimer,
you can call me a racist if you want, but remember, opinions are like assholes, we all have one.....
I am an independent, but the antics of "the left" this summer is enough to make me vote for "the right",
many of the protests have turned into unlawful gatherings, with rioting, burning, looting, and destruction,
anyone who thinks these things are OK, well, you are NOT OK, there's something wrong with you,
why should a business owner have to go out of business because you assholes got your schmuck out of joint?
why should innocent bystanders get their cars burned up?
why should a city have to rebuild itself because you "can't keep it in your pants?
you should be arrested or shot and then arrested, maybe more of you need to catch on fire, and die....
yes, a few bad cops showed their real colors, but destroying/burning/stealing is not the answer!!!
the protests have been going on for way too long, and the message has now been lost....
how would you like it if we came to your house and destroyed it or burnt it to the ground, or flipped your car over???
not very happy, I would think...
for those of you who take part in a peaceful protest, the ones we don't hear about, I applaud ya'll,
go home, stay home -- violence begets violence (witness the shitstorm on 1/6/2021!),
the protests are a conduit for the agitators that want the violence and suck everyone else in,
to do things they wouldn't normally do, pray about that in church this Sunday......
now, ask me how I really feel :-)  :-) ........